The latest game from CCP, a space dogfight game taking place in the same univers as EvE online but with the Oculus Rift! This sentence was the one who made me want to try this game by myself. Since I received my Oculus I tried many games, some made for VR, others no. Some were good, many were bad, the camera gave nausea pretty quickly, the game was too empty (like the hogwarts reconstruction) or not adapted. So for the first “real” game I was going to test I was hoping for something really good.

But first, let’s precises some things: I’m a huge fan of EvE online, I love this universe, it’s backstory, the player-oriented gameplay, etc. Yet I know how CCP work and given the fail of Dust (a FPS game) I was not sure about what to expect to find in Valkyries. I’m also not a big player of dogfight games, I played essentially on games like battlefield or battlefront, I also played to some simulation games but the nearest game I played was elite:dangerous.

That said When I launched the game the spark of excitement run down my spine, The introduction is really cool and allow you to delve immediately in the EvE universe without being overwhelmed by names, dates and other stuff like this. But it is already time to launch your first mission.

You open your eyes on your control board, in this soon familiar launching tube, and before you can get too distracted by the details in the cockpit, you get launched in space.

I had many “wow” moment in my life but this moment, that first take of in space is simply astonishing. My first minute in flight in each environnement, I passed it mouth open, looking all around me, looking at all the details, all the ships, the asteroids, I didn’t know were to focus. And the first mission is exactly here for that: you just follow your squad mates, listening to them, and then you die.

And in this introduction I felt like In EvE online: you never know from where the next threat will come. 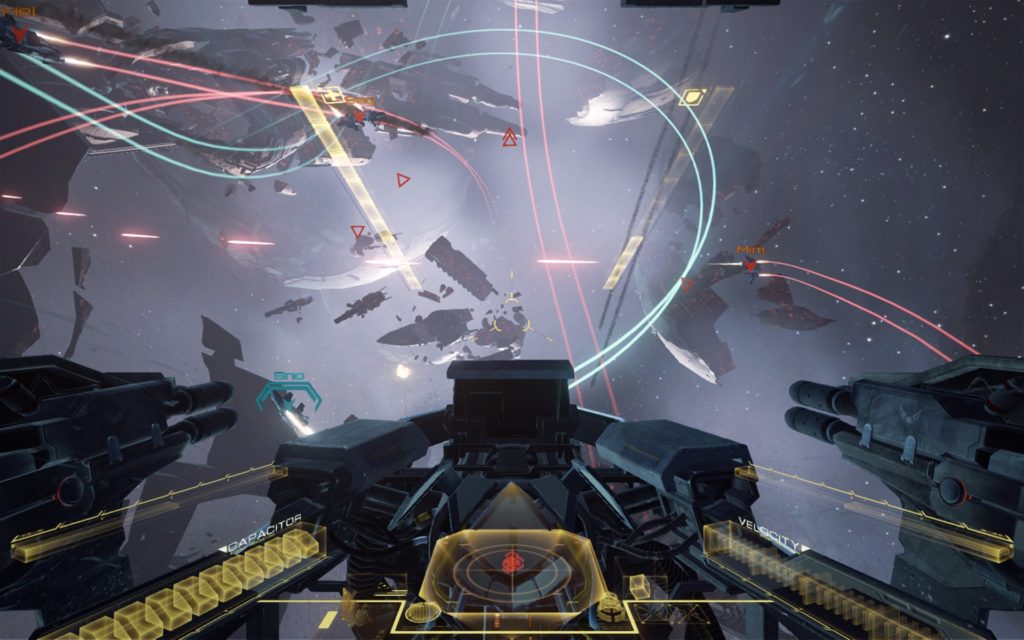 But if in the introduction you do have time for day dreaming, when in the first “real” mission (aka multiplayer) the firsts ennemies comes by, you start to fight, shooting in rapid fire, launching missiles, dodging, taking fire and so until your ennemies are all dead or you die (witch is not exactly a problem in EvE universe). Talking about the death it “feel” real, your cockpit start crackling as you approach the fatal moment, then the glass explode, taking with you your oxygen, heat and lastly your life.

At first the game feel slow, heavy, hard to turn, I remember my firsts multiplayer games, i felt like my ship was really slower than the one of the others pilots. And then I realized that
I could turn my head to look behind me, at this moment my ship reacted faster, I turned faster and in overall I was aware of what actually happened around me, were the fights were intense, were the ennemies were, what path they took, etc.

When you start to ACTUALLY look around you, you have a huge advantage, you can anticipate the enemy movement, better estimate if the fight is lost or doable. You learn to use the decor to avoid heat-traking missiles, to use the radar, to hide yourself in this asteroid, etc.

At this moment the game become far more nervous and deadly (for your ennemies, of course). At the moment there is no campaign, so the “story-side” of the game is pretty poor, there is only one “scout mission” per map with a few audio files to listen, for me, as a EvE player it was nice because it explained some things of EvE, but for someone who don’t know what in earth is a capsuleer, a jump clone, or a “POS”, I fear that the “one player” is pretty much non existant.

But that said, it’s not for that I play a shooter, would it be in space or not, it’s for the actual multiplayer part. And on this the game do well, there is an audio chat directly in the game, allowing you to chat with your squad mates and it also improve your efficiency many times.

I’ve yet to reach the point of “bored-room”, so even if I don’t play 24h a day, it has been a few month (an average of 2-3 match per week) so It’s a pretty good thing in my opinion.

Knowing CCP, if the game do well, they will add ships, story, customization and, if everything go fine, they will link EvE Online and Eve Valkyries into one and unique game!

And that would be bloody beautiful!

But let’s back to the present. How could EvE Valkyries be summarized:

To conclude:
Eve valkyries is a standard multiplayer shooting game. BUT the fact that it’s in VR and that the feelings are really good make this game so much better! EvE: Valkyrie take a new level of depth when you start to look around you, the game speed up, you react much faster, began to understand where and when to turn, speed up or down, etc. Yes, the gameplay is “basic” but the VR add a speed and a feeling that I’ve never felt before.
The game is good, even playing alone, but you’ll never enjoy it without a team, I had the chance to play with some squads and thanks to the ingame chat, you can talk without knowing each other, and there is nothing more satisfying than playing in group, flying in formation, tearing enemy ships apart seeing them not being able to be efficient, etc.